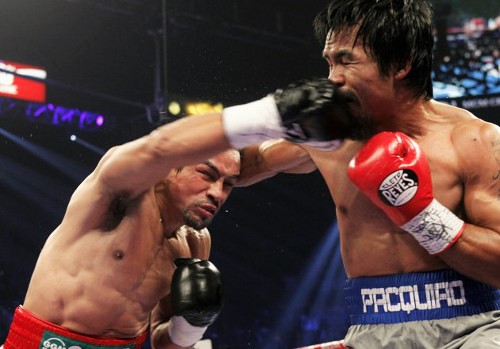 In recent weeks, I’ve made a concerted effort to highlight the conditioning benefits of actually boxing. I have emphasized that the sport itself is an effective form of exercise (i.e. bag work, shadow boxing, sparring, etc.). There’s obviously more to boxing than conditioning however. The sweet science is not a fitness contest, but rather a technical sport that carries with it a considerable learning curve. In this entry, I’ll use the counter punching brilliancy of Juan Manuel Marquez to highlight this point.

The Sweet Science On Display

If you are a fan of boxing, you surely remember the epic knockout that Juan Manuel Marquez scored over Manny Pacquiao in December of 2012. The right hand counter that Marquez landed against the lunging Pacquiao is one of the most memorable punches in recent history. It will undoubtedly cement Marquez as one of the best counter punchers ever. It certainly wasn’t the first time that he read and reacted to the actions of an aggressive fighter however. Marquez literally made a career out of countering his opponents.

Unfortunately, almost three years later, I continue to see casual fans describe Marquez’s knockout as a lucky punch. Such fans fail to realize just how long and hard Marquez worked to develop his counter punching ability. It wasn’t something that happened by accident, nor was it the product of luck. Instead, Juan Manuel Marquez steadily honed his skill throughout a lengthy professional career that started in 1993.

The brief video below highlights some of the training that led to Marquez’s success. Notice how each of his counters were repeatedly drilled in the gym long before they landed in an actual fight.

Veterans to the sport may assume that it is common sense for a boxer to develop his counter punching ability in the gym. Regrettably, common sense is everything but common when boxing is concerned. Speaking as a former fighter and current trainer, I believe boxing is perhaps the most misunderstood sport of all. An untrained eye will always be blind to the vast complexities that exist inside the ring.

With that in mind, one of my goals with this site is to get more boxers focused on the tasks that matter the most. As I’ve stressed before, great boxers from the past became great because of their emphasis on the sport. They boxed, boxed, and then boxed some more. Everything else was secondary.

In today’s world, the emphasis seems to have shifted towards training to box without enough actual boxing. I say this as both a trainer in the real world and also someone who regularly interacts with aspiring fighters from around the world. These young fighters often write to me asking how to train for boxing on their own. I’ve even begun to see questions coming in from people looking for boxing lessons online.

My response to these questions is always the same. If you are serious about competing, you need to find a real gym. There is nothing that you can do on your own to teach yourself how to box. Even the highest quality HD video won’t throw real punches at you to counter. Thus, while technology continues to improve, boxing will always be a sport that can thrive in archaic settings. Nothing will ever take the place of a good trainer, a pair of mitts, and quality sparring partners.

As for learning to counter punch, the best teachers will always be good mitt work, partner drills, and sparring. Ideally, your trainer will begin by drilling various counters while working the mitts (ex. see here). Each counter can then be practiced in a controlled setting with a partner. For instance, one boxer practices his jab while the other practices parrying or slipping (and then countering) the incoming punch. You can alternate between who punches and who counters each round.

The next step is to begin practicing these counters while sparring. A boxer will need to repeatedly practice his counters in the gym long before he’s able to successfully land the same punches in an actual fight. Just because you can land something in the gym doesn’t mean you’ll be successful when you are fighting an opponent that you aren’t familiar with. It’s therefore imperative that a boxer repeatedly practice his skills until they become second nature.

Great counter punchers are able to instinctively react without thinking about it. Their ability is in many ways similar to an experienced baseball player who casually catches a ball that is hit his way. The ball player does not have time to think about catching the ball. It’s just what he does instinctively after years of repetitive training. There is no flinching or uncertainty. The same is true of the experienced boxer who sits in the pocket and counters his aggressive opponent with pinpoint precision.

In summary, boxing did not earn its nickname the sweet science by accident. The learning curve for this sport is steep and takes years to tackle. Boxing isn’t the type of sport that you master in a few weeks or months. You can’t train around the need for experience. True skills are first taught in the gym, then practiced in sparring, and ultimately refined during actual bouts.

With that in mind, if you are serious about boxing, be sure that your training prioritizes the sport itself. No one will remember how fast you ran or how many pushups you performed if you can’t get out of the way of a punch. Great boxers are remembered for their skills first. Without skill, nothing else matters.

Thus, while I’m sure online boxing training will someday be a lucrative industry, don’t let anyone fool you to believe that you can learn how to box without regularly stepping inside of a ring. Throwing punches as part of a fitness workout is not the same as training to become a competitive fighter. If your interest lies with the latter, lace up the gloves and begin practicing the skills that will ultimately protect you when the bell rings.

There is no other way to prepare for boxing and there never will be.