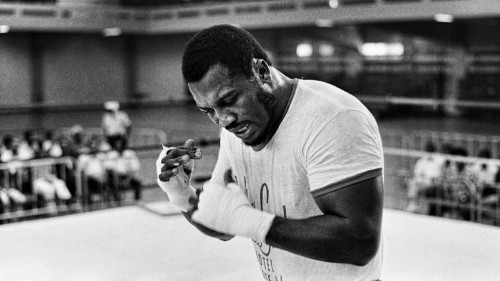 In my last post, I stressed the importance of boxing for a boxer. I stated that the most valuable part of a boxer’s training is the work that takes place with the gloves on (ex. sparring and bag work). It is impossible to get into fight shape without boxing. There are certain facets of the sport however that often require more concentrated work. For instance, many fighters complain to me that their legs fatigue prematurely while sparring. They write to me looking for answers to improve their lower body conditioning for boxing. With that in mind, I’ll use this entry to highlight one of my favorite lower body conditioning drills.

All boxers recognize the significance of the lower body. Once the legs fatigue, it becomes much more difficult to move effectively and avoid incoming punches. It almost feels as if your legs are stuck in cement. Your mind knows what it wants to do, but the lower body doesn’t cooperate.

As a result, it isn’t uncommon for boxers to spend a considerable amount of time conditioning the lower body. Focusing on the legs is certainly a good idea. The problem though is that many boxers limit their lower body training to general exercises that aren’t specific to how they actually move inside the ring.

I make this statement not to diminish the importance of general conditioning, but rather to highlight the significance of specificity. As I’ve demonstrated before, I’m a big fan of traditional exercises such as running hills and skipping rope. Calisthenics are also excellent. Yet, while these general exercises are clearly beneficial, they usually aren’t enough on their own. More specific work is also important, particularly if your style is one that includes considerable head movement.

Practice How You Move

One of the better drills that you can perform is to focus solely on moving as you would inside the ring. For example, you can repeatedly practice slipping punches, weaving under punches, feinting, and moving in all directions. You won’t be punching during the drill so you can exaggerate how much you would typically move. Your efforts will be concentrated solely towards the lower body.

Continue moving in this fashion for a few three minute rounds (ex. 3 rounds at the end of a workout). During each round, try to move the head constantly as if you were imitating Joe Frazier weaving his way inside. This drill can be enhanced further by wearing a light weighted vest (ex. 10 to 20 pounds).

A brief demonstration can be seen below.

If the legs become too tired to continue with such head movement, shift gears by moving laterally as if you were boxing from the outside. In other words, rather than imitating Joe Frazier, switch things up by imitating Muhammad Ali. You can then switch back and forth between the two styles. Just be sure that you continue to move throughout the duration of each 3 minute round.

This type of drill can be practiced a few days per week. You won’t need too much time to perform a few rounds so it can be easily added to your existing workload. For instance, you can practice this drill at the end of a sparring session or heavy bag workout. With regular practice, you’ll begin to notice that you can maintain a faster pace inside the ring, with more consistent head movement.