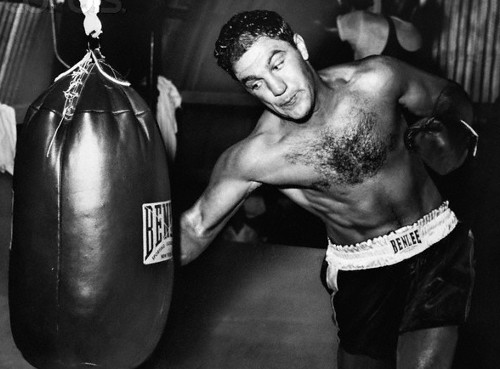 Throughout this blog’s history, I’ve emphasized the idea that boxing itself is a physically demanding task. In other words, the sport of boxing is in many ways its own form of exercise. Anyone who has ever fought will confirm this simple fact. No amount of supplemental exercise will ever replace the important task of lacing up the gloves. If you want to get yourself in shape for boxing, you need to box.

Although boxing has made a nice comeback as of late, it’s still a far cry from being a mainstream sport. Most adults have never sparred or fought competitively. There aren’t many who even punch a bag regularly. As a result, very few people truly understand the physical demands of punching and moving continuously for three minute rounds.

Boxing appears much easier than it is when you’re on the outside looking in. Even those who exercise regularly often underestimate the physical demands of the sport. A classic example can be seen in the video below. These fitness pros struggle immensely through a relatively simple boxing workout.

Before I comment on the video, I’ll start by saying that I applaud these individuals for going outside their comfort zone and trying something new. I’m certainly not sharing this video to poke fun at them for trying. I do however believe that there is a valuable lesson to be learned from this short clip.

How To Train For Boxing

I get a lot of questions about how to train for boxing, but most of the questions are about everything but boxing. For instance, I’m often asked about running, weight lifting, calisthenics, and supplementation. More and more people seem to want ideas about conditioning for boxing without recognizing the importance of specificity.

Overlooking the significance of boxing for a boxer is a huge mistake. Contrary to what many believe, the most important exercises that you’ll ever perform as a boxer take place with the gloves on. A few examples include sparring, mitt work, and punching a heavy bag. I don’t say this to suggest that supplemental work isn’t important. On the contrary, I’m making this point to highlight just how important the actual boxing training is to a boxer.

Unfortunately, there are more and more fitness trainers entering the world of boxing without prior boxing experience. As a result, the actual boxing training doesn’t always receive as much attention as it should. Instead, fitness pros are more likely to highlight their own areas of expertise. Consequently, strength training and general fitness are often overemphasized at the expense of the actual boxing training.

If you look back at the sport’s greatest fighters, you’ll find at least one common theme. The best boxers typically spent a lot of time boxing. Everything else was secondary. For example, Henry Armstrong once had 27 professional bouts in a single year. At another time, he fought 10 consecutive opponents who had 795 wins between them. In 1942, he had two bouts in the same month against opponents with 100+ wins each. Armstrong didn’t just fight often. He fought anyone and everyone.

Another fighter with a similar story is Sugar Ray Robinson. Robinson is considered by many to be the greatest boxer to ever live. Like Armstrong, he fought regularly and never strayed far from his traditional boxing training. At one time in his career, Robinson fought Jake LaMotta twice in the same month. He also had a 10 round tune-up bout in between against another 50+ fight veteran (California Jackie Wilson).

Fighters such as Robinson and Armstrong fought so often that they were never far from being in fight shape. When you box with such regularity, you naturally become conditioned to box. You aren’t just physically prepared though, but also skilled enough to efficiently punch and move without wasting unnecessary energy.

Some will point out that times have changed, so there aren’t the same opportunities to fight as often. I don’t dispute this fact, but it’s not an argument against training with the gloves on. Just because the times have changed doesn’t mean that you need to as well.

You can still follow much of the advice from other past champions like Jack Dempsey. As discussed within his text, he was a huge advocate of using the sport as the primary means of conditioning (ex. sparring, bag work, shadow boxing, etc.). In doing so, you become more skilled, conditioned, and efficient.

And often times, efficiency is what matters the most. Experienced fighters expend less energy performing the same movements that will quickly fatigue a beginner. All of the general fitness training in the world won’t help the individual who is tense inside the ring.

In summary, if you are serious about boxing, be sure that your training is focused around boxing. You won’t get into boxing shape by training to become a fitness professional. Focus on your sport first. Supplemental work can then be added in small doses, but should never take precedence over the actual sport. The best fighters typically spend a lot of time with the gloves on. Follow their example by prioritizing your own boxing training.