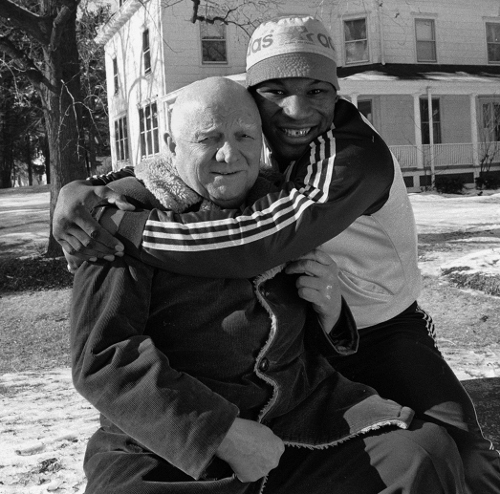 Over the years, I’ve learned many valuable lessons in the gym that wouldn’t make sense on paper. I say this as both an athlete and perhaps more importantly as a trainer. There are times when it makes sense to go against the grain and do things that others may not understand. Success as a trainer depends on much more than your knowledge of anatomy and kinesiology. The ideal solution to individual needs cannot always be calculated scientifically or determined mathematically. Often times, the temperament of the athlete will dictate the ideal approach.

Learning from Cus D’Amato

As a boxing trainer, I look up to the legendary Cus D’Amato as perhaps the greatest example of this concept. Cus is most known for his work with Mike Tyson, but he was also instrumental in the development of other Hall of Fame fighters such as Jose Torres and Floyd Patterson. Cus was a student of the game and understood the inner workings of a fighter’s mind. He was the polar opposite of the clipboard trainers who have become so common today. Cus had brilliant insights into the sport and a deep understanding about the psychology of fear and discipline.

When Cus developed an athlete, he wasn’t focused solely on physical attributes. Boxing training for Cus involved much more than boxing. He did as much for the mind as he did for the body. There is no better example of physical and mental development than that of a young Mike Tyson. Tyson came to Cus D’Amato as a youngster who lacked discipline and was mentally unstable. He was far from the dominant force that he became as a young heavyweight.

The Development of Mike Tyson

Mike Tyson did not become the youngest heavyweight champion by accident. Everything that Cus did with Tyson was done for a reason. There was a method to his madness. Ironically, many of today’s keyboard gurus who have never trained anyone often criticize the workouts and regimen that Tyson performed. For instance, the internet is filled with discussions about Tyson’s routine as a youngster. Many question why he trained 7 days a week, or why he performed hundreds of repetitions of calisthenics. Others ask why he ran at such an early hour in the morning. Countless pencil pushers have stated that such frequent and intense work could lead to overtraining and was everything but optimal.

Cus D’Amato knew better however. He knew what he had in Tyson. Yes, he was naturally strong, but Tyson was also mentally fragile. You can see an example of his early mindset in the video below. You’ll see how Tyson was plagued by fear and insecurities.

Cus knew of Tyson’s deficiencies and tailored the training accordingly. He had to turn Tyson into a conditioning machine for reasons that go far beyond the physical.

For example, Cus stated the following in regards to a fighter’s development:

I get them in excellent condition… Knowing how the mind is and the tricks it plays on a person and how an individual will always look to avoid a confrontation with something that is intimidating, I remove all possible excuses they’re going to have before they get in there. By getting them in excellent condition, they can’t say when they get tired that they’re not in shape.

Cus also knew of the trouble that Tyson had been in as a youngster. Mike Tyson was far from a saint when he was taken in by Cus D’Amato. Tyson had been in and out of trouble his entire life. As a result, it is no surprise that Cus kept Tyson busy throughout the day. The last thing that you want a troubled teen to do is wander off on his own. Instead, you keep him busy even if it means having him do more work than it makes sense to do. Cus wasn’t just building Tyson’s body. He was developing mental toughness in someone who didn’t have it. He was developing discipline in a fighter who was young and reckless.

It was the discipline and knowledge that Cus gave Tyson that led to his success as a young pro. Sure, there will always be debates about the specifics of Tyson’s training and perhaps even exaggerated tales, but there is no denying that he worked extremely hard for several hours each day. And Tyson’s Spartan-like regimen continued as a young pro as is evident in the video below.

As for the success of Cus D’Amato’s methods, it is undeniable how Tyson’s career slowly fell apart when Cus died and after the firing of Kevin Rooney (who had been tutored by Cus). Once Tyson lost the discipline that Cus worked so carefully to construct, the physical force that Tyson had become slowly came crashing down.

In summary, the development of a fighter entails much more than the regimen you see on paper. To be a successful trainer, you must communicate with your athletes. You need to know what makes them tick. You need to know what distracts them and what has hampered them before. Don’t just focus on physical development, but also understand the significance of the fighter’s temperament.

Analyze each athlete as the unique individual that he or she is. What works for one may not work for another. Fighters are human beings, not robots. To develop a fighter, you will need much more than book knowledge. You will need to carefully construct both the physical and mental side of the individual. Cus D’Amato laid out the blueprint for such an approach. His work should be studied by all aspiring trainers and fighters. There is always something to learn from the greats who came before us.