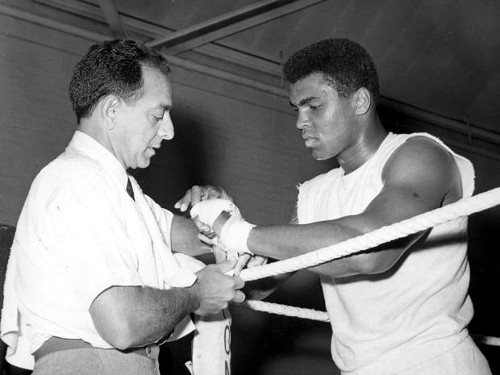 If you are familiar with my training website, you know that I am a fan of do-it-yourself projects. Much of my equipment is homemade. You can even construct your own heavy bag for boxing training as seen here. Yet, despite the abundance of do-it-yourself options, there is one project that you cannot build alone. If you wish to transform yourself into a competitive boxer, you will need assistance. It is impossible to teach yourself how to box at a high level without the guidance of an experienced boxing trainer.

The most common question that I am asked by beginners who are interested in boxing is the following:

“What can I do on my own to get ready for the boxing gym?”

Most people who ask this question do not feel that they are ready to train at a boxing gym. For example, I hear from many enthusiastic individuals who just don’t believe that they have the conditioning necessary to box. They consider themselves out of shape so they’d rather train at home for a few months before stepping into a real boxing gym.

In theory, there is nothing wrong with working hard to prepare yourself for a future endeavor (i.e. boxing). The reality however is that whatever you do on your own will not be as effective as what could have been done at a real boxing gym. No matter how hard you work alone, you will still enter the doors to the boxing gym on your first day as a complete beginner.

The best thing that you can do as an aspiring boxer is to tackle the steep learning curve of the sport as soon as possible. Boxing involves much more than physical conditioning. The technical demands are infinitely more complex than the casual observer will ever comprehend. Hours upon hours of work are required inside the ring before you will ever feel comfortable, composed, and confident. Such attributes cannot be developed alone.

Not only will you learn faster and get in shape faster at a boxing gym, you will also prevent yourself from developing bad habits. I couldn’t tell you how many beginners I have seen enter the gym with a boatload of bad habits that were developed while training at home. Something as simple as dropping your right hand when you jab with your left takes much more time to fix if you have been doing it wrong for several months alone. The best way to learn any new skill is by learning it right the first time.

An accomplished trainer not only knows how and what to teach you, he also has an experienced set of eyes that will overlook your development. He will notice and correct mistakes before they become cemented habits. One simple correction early on can save you hours and hours of frustration down the road.

You will also have the opportunity to train alongside more experienced boxers. Contrary to what some beginners believe, most boxing gyms are large families. Everyone looks out for each other. Boxing gyms are not filled with savage beasts who are hoping to knock your head off. An experienced fighter will respect a true effort regardless of your ability. There is no reason to feel embarrassed or nervous about entering a boxing gym. Every famous fighter that you have ever seen walked into the gym as a beginner at one point. No one enters the gym as a champion.

Perhaps the best way to solidify the point of this entry is with an example. Suppose two friends decide today that they want to become boxers. One decides to train on his own for the next three months. The other joins a local boxing gym and starts working with a trainer. Who do you think will be more developed in three months?

I will bet my money on the friend who started at the boxing gym. He will be learning from an experienced trainer and training alongside other more experienced fighters. Many of those fighters will likely be eager to share tips and advice. The fighters will also push the beginner to work harder. Such encouragement typically leads a beginner to get in shape much faster than he would on his own. It is easier to stop when you are alone. No one wants to quit when there are others cheering you on.

Lastly, just because one of the friends opts to train at a boxing gym does not mean that he can’t practice at home. The difference however is that he will be practicing what he learned at the gym from an experienced trainer. The other friend will practicing on his own without instruction.

In summary, if you have any serious aspirations to eventually box, you owe it to yourself to get into a real gym as soon as possible. Many facets of the sweet science simply cannot be developed alone. You need a trainer to learn and you will eventually need sparring to practice what you’ve been taught. There is no time like the present so don’t put your dreams on hold.