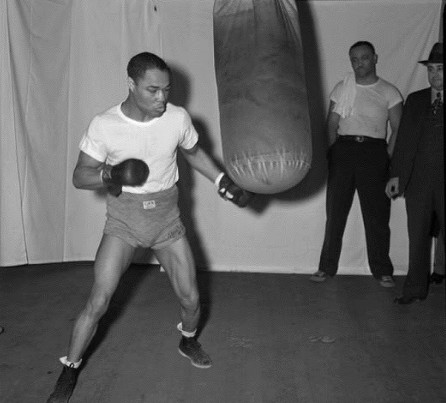 In my last entry, I highlighted the training style of the legendary Sugar Ray Robinson. Another fighter who followed a similar approach and is also worthy of the “legend” title is Henry Armstrong. Commonly known as Homicide Hank or Perpetual Motion, Armstrong fought at a blazing pace from start to finish. His pressure was relentless. His stamina was endless. He never stopped throwing punches.

The natural question therefore is what was the secret to Armstrong’s conditioning? Some boxing historians will credit his abnormally large heart for his endurance, but I personally believe there is more to it than that. Yes, an autopsy did reveal that his heart was larger than normal, but Armstrong’s effectiveness was also rooted in his activity. He did not just keep a fast pace while fighting. He literally fought all the time.

If there is one lesson that young fighters can take from Henry Armstrong, it is to stay busy throughout the year. Unlike many fighters today, Henry Armstrong never had periods of inactivity. Even though he enjoyed night life and partying, Armstrong was in the ring so often that there was rarely time to get out of shape.

In the busiest year of his career, Henry Armstrong fought 27 times. At first glance, you may be wondering if that is a typo. It is not. Henry Armstrong had 27 professional fights in 1937. He had 9 fights between July and September alone. Many of today’s fighters are lucky to have two or three fights in an entire year. Is it really any surprise that most lack the endurance of yesteryear’s legends?

Staying busy is not just about staying in shape. Henry Armstrong had much more than endurance. He was a gifted fighter who once simultaneously held world championships in three different weight classes.

Fighters in today’s era are often far too concerned about supplemental strength and conditioning, and not concerned enough with actually boxing. If you want to improve as a boxer, you need to box. To improve at any activity, you need to perform the activity.

Unfortunately, many athletes overlook this seemingly obvious advice. Everyone wants to know what exercises to perform rather than spending more time performing their sport. And I say this not to suggest that supplemental work cannot be useful. Such work can certainly be beneficial, but must never take precedence over the actual sport.

The simple concept of practicing your sport goes far beyond any boxing ring. If you analyze common traits of successful athletes in any sport, you will notice that these individuals spend a considerable amount of time mastering their craft. We can look at Major League Baseball for a classic non-boxing example. It has become increasingly common for young players from the Dominican Republic to dominate on the baseball field. The entire population of the Dominican Republic is only around 10 million. There are several US states that have much higher populations.

Why then are so many high level players coming from the Dominican Republic? The answer is obvious. Kids from the Dominican grow up playing baseball throughout the year. When you play baseball all year, there is a good chance that you are going to become good at baseball.

The same argument could be made of soccer players in countries such as Brazil. The legendary Pelé is a prime example. He grew up in poverty yet became the greatest player in the history of the sport. He did not grow up in an elaborate strength and conditioning facility. He grew kicking a sock stuffed with rags around the streets of Bauru.

The take home lesson from this entry should be quite simple to grasp. If you are a boxer, most of your time should be spent boxing. Surely, fighters will never compete as often as they did in previous generations, but you can stay busy by sparring, shadow boxing, hitting the bags, hitting the mitts, etc. Never lose sight of the importance of training with the gloves on. Once again, everything else is secondary.

The best way to stay sharp as a fighter is by staying active. The best amateur fighters stay busy throughout the year. They compete regularly at the local level and at larger national tournaments. The best professionals also stay busy. The previously discussed Bernard Hopkins is perhaps the best modern example. He never allows himself to get out of shape. He is always working.

Too many modern athletes live in constant fear of working too hard. They baby their bodies as they’ve been led to believe that anything strenuous must be a sign of overtraining. Such individuals would have never survived in Henry Armstrong’s era.

Armstrong was one of the best conditioned fighters of all time. He trained hard, focused much of his attention towards the sport itself, and fought regularly. He steered clear of the complexity that is so common in today’s era. Young fighters will learn plenty by studying the greats such as Henry Armstrong.

Fighters of his kind are truly a thing of the past.