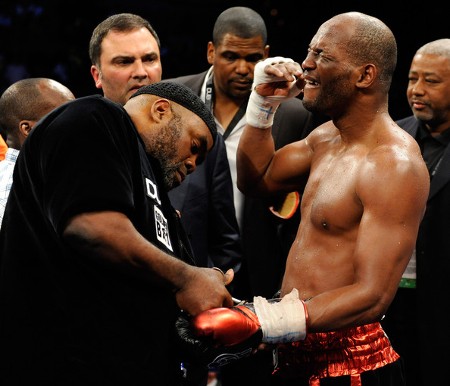 As I have mentioned before, Naazim Richardson is an excellent boxing trainer who spits knowledge whenever he speaks. There’s a vibe to him that just tells you to listen when he talks. More often than not you’ll benefit by heeding his advice. Aspiring boxers can learn plenty by listening to his words. Fortunately, Naazim does not limit his advice to fighters. He also has excellent advice for trainers. All boxing trainers should take one minute to watch the brief video that follows.

Be a Trainer, Not a Hater

Naazim’s advice is simple, yet profound. In short, it is important to learn from those who came before you, and equally important to focus on your own work. It serves no benefit to waste time as a hater. Unfortunately, if you have been around boxing, there’s a good chance that you’ve encountered trainers who go out of their way to bash others. These individuals have forgotten the true role of a trainer. Rather than focusing 100 percent of their time towards improving their athletes, they instead waste it by highlighting what is wrong with every trainer but themselves.

In many ways, these trainers would benefit by listening to Naazim’s first suggestion. As he states within the video, listen to the old timers. Many of the old-time boxing trainers shared wisdom that would have pointed these misguided trainers in the right direction.

In other words, the trainer is never the primary person involved in a boxing match. A trainer who constantly highlights his own strengths while dismissing others has done nothing but stolen attention from his fighter. Why waste time talking about another trainer when you could instead be teaching or promoting your own fighter? Trainers should never seek to steal the glory from the fighters. Steer clear of those who do.

To no surprise, Freddie Brown (another legendary trainer) offered similar advice to Dundee. In his words:

“The first thing a trainer should realize is that he must let the fighter take credit for all his successes.”

Trainers who focus on their fighters and give them the credit are not the type to waste time criticizing others. Once again, doing so is nothing but wasted energy that offers nothing in return.

Lastly, perhaps the greatest trainer of all time, Ray Arcel, offered the following:

“I’ll tell you something about trainers… and that includes me. You’re only as good as the fighter you work with. I don’t care how much you know, if your fighter can’t fight, you’re another bum in the park.”

I have always enjoyed this Ray Arcel quote. Despite being perhaps the greatest trainer ever, he still gives credit to the fighters. He never tried to steal the glory from the fighters who went out and answered the bell. Similar to Angelo Dundee and Freddie Brown, Ray Arcel assumed a secondary role. He wasn’t running around the gym with a huge ‘I’ on his shirt. Instead, he did his best to prepare his fighters and let their actions speak for themselves.

In summary, there is no reason to go out and tell everyone how great of a trainer you are. There’s also no reason to waste time telling everyone why someone else isn’t as good as you. Doing so is not only a waste of time, but also indirectly suggests that the fighters cannot think for themselves.

Contrary to what some believe, it doesn’t take long for a fighter to figure out who is a good trainer and who isn’t. The trainer does not need to market himself. He just needs to go out and do his job. The fighter will then decide where to train as the trainer works for him, not the other way around.

As Judith Martin once said,

“It is far more impressive when others discover your good qualities without your help.”

Martin wasn’t talking about boxing, but her words are certainly relevant to the trainers who exist in our sport. If you are good, you are good. People will find out. And if you don’t know a left hook from a fish hook, it’s only a matter of time before word gets around. There are very few secrets in today’s world. Good trainers are easily recognized by their ability, not by the words they speak or those that have been spoken by others.