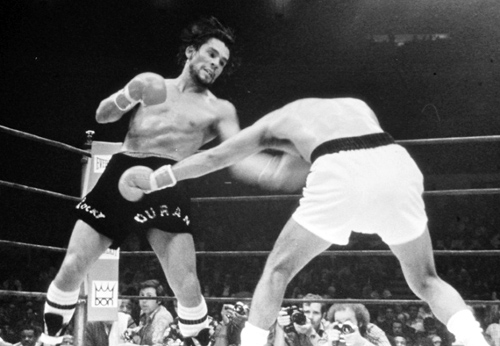 As a coach, I’ve always been a big believer in getting athletes to study the greats who came before them. In other words, don’t limit your learning to what takes place in the gym. A consummate professional takes the sport home with him and constantly strives to improve. As mentioned before, so much can be learned by studying video footage of past and present champions. One fighter who is certainly worthy of your attention is the legendary Roberto Duran.

Nicknamed Manos de Piedra (Hands of Stone), Roberto Duran fought with a relentless style that merged tenacity with effective aggression. When Duran fought, he wasn’t just coming to win. He was coming to hurt you.

Duran wasn’t just aggressive though. He was also extremely skilled. His offense and defense worked seamlessly together. Between his head movement, feints, footwork, and brilliant combination punching, there’s no denying that Duran was one of the best ever.

With that in mind, it makes sense to listen when a legend such as Duran is willing to share his knowledge. In this video below, he shares some old school wisdom with a group of fighters from the UK.

For the younger readers who might not be familiar with Duran’s career, the defense that he demonstrates above can be seen in action below. It won’t take long to appreciate his skill. Duran had an uncanny ability to make subtle movements with his head that would cause incoming punches to either miss or reduce their impact.

“The way to know about championship quality is to learn from champions, and that I did; studying them with professional purpose.”

I highly encourage all fighters and trainers to heed Tunney’s advice. Plenty can be learned by studying the greats such as Roberto Duran. Don’t limit your studies to the brief videos above however. Many of Duran’s classic bouts can be seen in their entirety on YouTube (ex. Duran vs. Palomino). Not only will you learn by observing Duran throughout his career, but you can also expect to be highly entertained by one of the most exciting fighters ever.