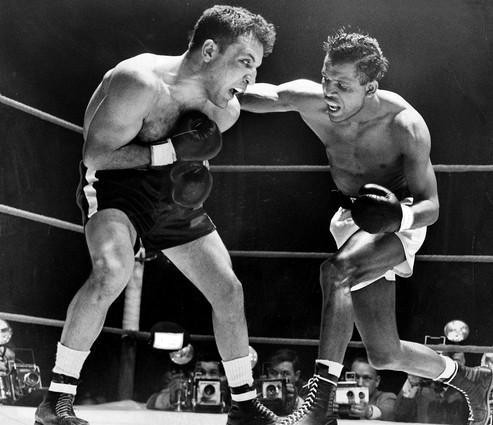 One of the themes that I’ve emphasized throughout this blog is the importance of learning from the greats who came before us. Many of the best boxers in the sport’s history fought in previous eras. Therefore, the only way to pass the torch of knowledge from past to present is by observing and learning from those legendary fighters. As I’ve said before, it is important to become a student of the game. Few will argue against such advice. Thus, the real question is not whether we should learn from other fighters, but rather what is the best way to do so?

I am a big believer in simplicity when it comes to training. There is no doubt that a boxer can get into tremendous condition without ever touching fancy equipment. Anyone who suggests otherwise is not familiar with the sport’s history. Yet, while past fighters may have thrived on simplicity, we can use modern technology to study and learn from their greatness.

One of the best things that I ever did as a trainer was to learn some basic video editing skills. I am by no means an expert videographer or producer, but it is not difficult to save and then analyze videos from YouTube. With a few free programs, I can slow a fight down to the point where I can literally watch it frame by frame. Doing so allows me to see intricate details that the human eye may have missed in real time.

Most boxing fans are familiar with Ray Robinson’s famous knockout victory over Gene Fullmer. The punch that Robinson landed is considered by many to be the greatest left hook ever thrown. If you haven’t seen it before, scroll to approximately the 8:50 mark within this video.

Fortunately, if you wish to analyze the fight in more detail, you can do so quite easily. There are several free programs that will allow you to download YouTube videos. Personally, I use the DownloadHelper add-on within my Firefox browser. A screen shot of the add-on can be seen below (refer to the upper left corner). 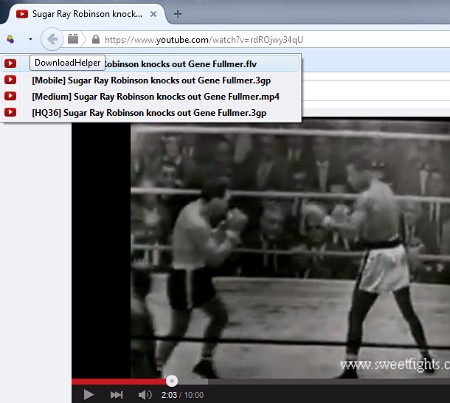 I have a separate hard drive that I use to store boxing videos. Once the file has been saved to that drive, I open it within a video editing program. For demonstration purposes, I took a screenshot from the freely available Windows Movie Maker (see below).

There are certainly better video editing programs available, but the free Windows Movie Maker does everything that I need. I can load a saved video into the program and slow down specific scenes to analyze each movement. It is also much easier to rewind or fast forward to a specific frame. I am not limited by my Internet connection as I would be when watching from YouTube.

When discussing video analysis, there is always someone who does not believe it is necessary. Don’t be that person. No one is too good to learn from video. The human eye can only observe so many things at once when witnessing a fast paced athletic event. The ability to slow down the action and rewind it as many times as necessary is truly invaluable.

Almost every other high level sport relies heavily on video analysis. Boxing should not be any different. Trainers should regularly analyze video of their boxers as well as other fighters from past and present. No trainer knows everything and there is always something new or different to see or learn.

Video analysis should not be limited to studying actual bouts. Athletes can also study video of themselves in training. For instance, it can be particularly useful to record sparring sessions. Many fighters make mistakes while sparring without realizing it. Watching the session over will allow the athlete and trainer to identify areas that need further improvement.

A boxer can also study video of himself shadow boxing or hitting the bag. Doing so would be similar to a professional baseball player who studies video of himself swinging a bat or pitching a ball. Once again, no one is too good to analyze video of themselves in action or in training. Video does not lie and will often reveal mistakes that may have been previously overlooked.

Video analysis in boxing is typically limited to studying footage of future opponents. For example, when a bout is made, trainers will scramble to find film of the opponent. Such work is obviously important, but should not be the only time that video is analyzed. There are many more opportunities to learn and improve through video analysis.

And please note, I am not suggesting that you record and study every minute of training and competition. I am also not suggesting that you download and study every boxing video on YouTube. It can certainly be useful to study video on occasion however. Whether you are a trainer or fighter, video analysis will allow you to see or learn things that you may not have been aware of before.

No one will ever be too good to learn so I highly recommend using video to your advantage.