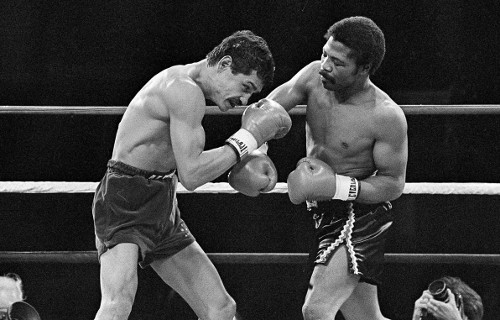 Earlier this week, I was saddened to hear that the boxing world lost yet another Hall of Famer. Former light welterweight champion Aaron “The Hawk” Pryor passed away in his home on Sunday. He was just a few weeks short of his 61st birthday.

It’s always sad to see a great champion pass away, but Pryor will forever be remembered for his action packed fights and exciting style. When Aaron Pryor fought, the fans could be assured of at least one thing. They were going to see plenty of action. Pryor’s aggressiveness made him one of the most crowd-pleasing fighters in recent history. His first fight with Alexis Arguello remains one of my all-time favorites. It should be mandatory viewing for all fighters and fight fans.

Pryor wasn’t just an exciting fighter though. He was also extremely talented. With that in mind, now is a perfect time to look back at some of the skills that made him so effective. In the video that follows, you’ll see a breakdown of Aaron Pryor’s unique style and skillset.

The video below comes from a channel that was recently passed along to me (Reemus Boxing). I had not heard of it before, but it’s definitely worth a look. They did a great job breaking down some of Pryor’s trademark tactics.

Another great thing about Aaron Pryor was his ability to adapt to what was in front of him. A perfect example can be seen in his first bout against Arguello. Pryor talks about the adjustment he made in the video below at approximately the 1:28 mark.

As stated within, Arguello wasn’t expecting Aaron Pryor to begin boxing him from the outside. That’s what great fighters often do however. They make adjustments in the middle of a fight based on what’s in front of them. They don’t limit themselves to a single style. They are able to fight at close range or from a distance.

What I also enjoyed about the interview above was how Pryor said he was thinking of Muhammad Ali when he began boxing on the outside against Arguello. Consider the context of that statement. Aaron Pryor was an unbeaten champion and he was imagining that he was another great fighter in the middle of a world title bout.

Pryor’s imitation of Ali might be the best testament ever about the importance of learning from the great fighters who’ve come before. There’s always something that you can learn from past legends. It’s also never too late to implement a portion of their style.

Speaking a trainer, I often refer to past boxers when explaining a new concept to another fighter. For example, I might tell a fighter to imitate Larry Holmes when snapping the jab. Adding a visual cue from a past champion has always been an effective teaching method for me.

Since I’ve made a few references to the Pryor vs. Arguello fight, it only makes sense that I share it below. It’s a such a great fight that you could literally study it day after day and never grow tired of it.

It’s always sad to see a great champion leave us. My thoughts go out to Aaron Pryor’s family. And while I’m sure it offers no consolation, I speak for many when I say that the excitement that Aaron Pryor brought to the sport will never be forgotten. He was a great champion that young fighters should study and continue to learn from. It some ways it will always be Hawk Time.