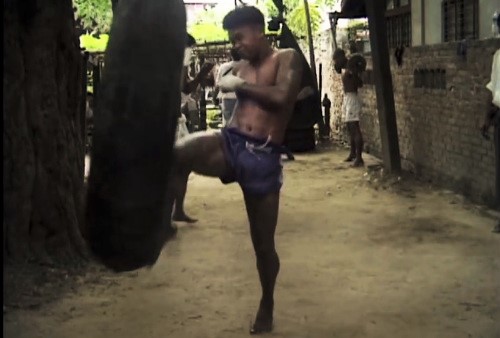 Since I’ve begun to revive this blog, I’ve had several boxing coaches ask me for training ideas that can be performed in gyms with limited funding and equipment. With that in mind, I will begin to highlight some successful fighters and/or programs that have excelled with little or nothing. One of the beautiful things about boxing and other combat sports is that you don’t need a fancy facility to condition yourself to fight at the highest level. A prime example can be seen by observing the lethwei fighters from the poor nation of Myanmar.

The Burmese martial art known as lethwei features full contact fights that take place without protective equipment. There are no gloves and head butts are permissible. Therefore, it goes without saying that lethwei isn’t for the faint of heart. Only well trained, highly conditioned fighters will last in the sport.

Yet, despite the physically demanding nature of lethwei, many of the sport’s best fighters have excelled while training in impoverished lands. Myanmar itself is one of the poorest nations in Southeast Asia. More than half the population lacks access to electricity. With that said, it is no surprise that lethwei fighters and trainers are masters at making the most out of limited resources.

A classic example can be seen through the footage below. What you’ll find is a traditional Myanmar boxing club that is located on a narrow, unmarked street. These fighters don’t train in a gym, but rather outside in the open air. This outdoor gym is located in North Okkalapa Township.

Yet another example can be seen below courtesy of filmmaker Vincent Giordano. He filmed this footage of another outdoor gym that’s located in Mandalay.

Ironically, the two outdoor gyms above aren’t located anywhere near each other. North Okkalapa Township is over 350 miles away from Mandalay. It’s actually somewhat amazing how similar the gyms are considering the distance between them. If I didn’t know better, I would assume that the two gyms are situated right down the road from each other. The resemblance is impossible to ignore.

Upon examining the footage above, it’s clear that these lethwei fighters rely heavily on the basics. In many ways, you could say that they train quite similarly to what was recommended many years ago by Jack Dempsey. They shadow box, hit makeshift bags, spar, skip rope, run, and perform calisthenics. They certainly do not need anything fancy to condition themselves and improve their skill. Instead, they practice their sport regularly and never stray too far from it.

As I’ve said before, the best gym in the world could be an empty barn if it had good sparring partners and a knowledgeable coach. Everything else is secondary. There’s not a piece of equipment in the world that can teach you how to fight.

Fortunately, you don’t need to be a bare knuckle fighter from Myanmar to benefit from the example set forth by these lethwei fighters. Plenty can be learned by simply observing their resourcefulness. If these high level fighters can condition themselves in outdoor gyms, don’t be fooled to believe that your facility needs to be equipped with high-end equipment. Equipment will always be secondary to quality coaching.

In summary, make the most of what you have. Never be fooled to believe that your fighters cannot improve by training in a gym that has minimal funding and equipment. As evident through the examples above, plenty can be accomplished with little or nothing. It doesn’t cost a dollar to work hard and remain consistent. Those attributes are freely available to all. It all comes down to how hard the fighter is willing to work to achieve his goals.