In a recent video, Floyd Mayweather was seen chopping wood in preparation for his upcoming bout with Manny Pacquiao. Ever since Floyd shared that short clip to Instagram, my inbox has been flooded with questions about wood chopping and its relevance to boxing. Before I elaborate on the subject, you can first hear Floyd discuss this old school training exercise in the video below.

Floyd begins by explaining how he started chopping wood as an amateur boxer. Hearing that he chopped wood as a young fighter was no surprise to me. Many of the greatest fighters in the sport’s history have chopped wood or swung a sledgehammer. Both exercises will develop power and endurance.

Towards the end of the video, I enjoyed hearing Floyd state the following:

In many ways, this single line solidifies much of what I’ve preached throughout this site. I’ve discussed countless fighters from previous generations who also thrived on the basics on their way to becoming all-time greats. Whether you are a fan of Mayweather or not, it is impossible to deny his talent and ability. Floyd has always been a gifted and highly conditioned fighter. He has excelled with a relatively simple approach to training.

Anyone who has ever been in camp with Mayweather will testify to his tremendous work ethic. I’ve personally heard from multiple sparring partners who were amazed at how hard he works when the cameras aren’t rolling. There’s much more to his training than a flashy mitt routine. He hits the bag hard, spars hard, skips rope at a furious pace, lifts weights, performs calisthenics, etc. There’s nothing fancy, just a consistent dose of hard work that’s applied to the basics.

As for Floyd’s return to wood chopping, he’s not the first fighter to hack his way to greater strength and endurance. One of my favorite quotes about wood chopping comes from legendary puncher Earnie Shavers.

In a past interview, Earnie stated the following:

“Archie Moore showed all his old tricks to me when he trained me. He got me chopping trees to improve my explosive power in my legs, back, shoulders and arms which are all places where punching power comes from. ”

Shavers wasn’t the only heavyweight to chop wood however. An abbreviated list of additional fighters can be seen below. 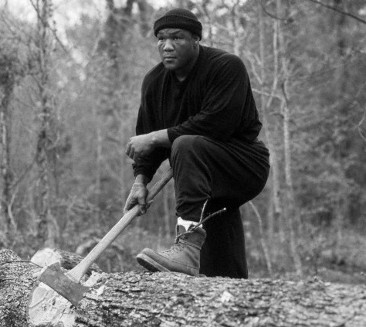 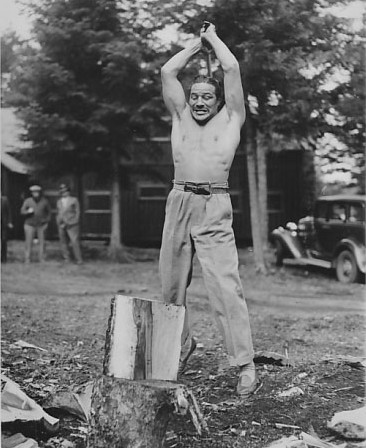 Max Baer was also known to chop wood at training camp. He can be seen above preparing for his fight with Joe Louis. Unfortunately for Baer, Joe Louis was also a big fan of chopping wood. He went on to defeat Baer by knockout. 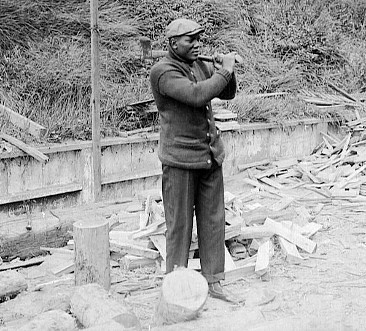 Jack Johnson was yet another legendary heavyweight from the past who spent plenty of time chopping wood. In the picture above, you’ll notice a huge pile of wood that he split while in camp. All of that wood chopping certainly helped his conditioning throughout a lengthy championship reign. 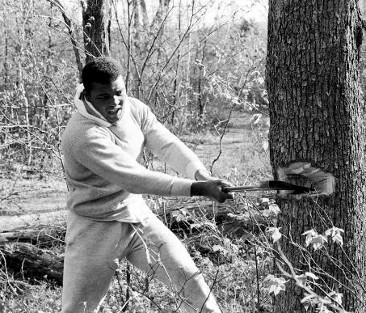 Muhammad Ali also chopped wood and even cut down trees. He’s yet another all-time great who thrived on the basics. He didn’t need any fancy equipment to become one of the greatest heavyweight boxers ever.

In summary, chopping wood has long been a favorite exercise of world champion fighters. And if you don’t have wood to chop, you can certainly use a sledgehammer. For instance, Earnie Shavers also stated the following about his training:

“And when we trained where there were no trees to chop he (Archie Moore) brought in huge truck tires and got me hitting them with a sledgehammer over and over.”

As for chopping wood vs. swinging a sledge, I’ve spent plenty of time doing both. There are pros and cons to each. Swinging a sledgehammer is certainly more convenient though as it won’t make a mess and one tire will last a lifetime. Ultimately, whether you choose to chop wood or swing a sledgehammer, you can expect similar results however. Both activities are tremendous conditioning exercises that will also develop power.